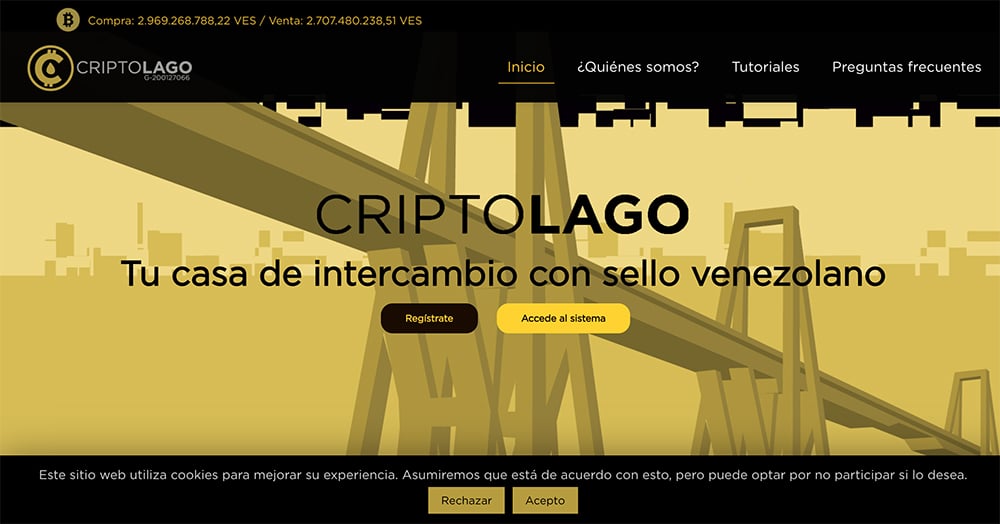 The research firm and security on blockchains, Chainalysis, issued this Tuesday a report that was classed as “Intelligence Report of the Crime Crypto” about the house of change of cryptocurrencies of Venezuela CriptoLago. The company, with headquarters in the united States detailed what type of operations are performed from the platform and what is their volume of operations.

In the document sent to Breaking News and entitled “Analyzing one of the exchanges of cryptocurrencies approved by the regime in Venezuela”, Chainalysis points out that since July last year have made a total of 5.633 related transactions with bitcoin in CriptoLago, through nearly three thousand addresses.

“Chainalysis has identified 2.952 addresses of bitcoin controlled by Criptolago. Together, these addresses have received 67,35 BTC and sent 66,97 BTC through 5.633 transfers. The current balance of all the addresses of Criptolago is 0,053 BTC”, stressed the company of intelligence. However, the figures supplied by the agency does not agree with the data arranged in the document.

In the following graph we see how has been the history of transactions of the bag that includes, from highest to lowest, the operations of the users to exchange houses standard, exchanges between peers, betting services, mining, services, commercial establishments, and houses of change of high risk.

Chainalysis published a history of transactions that has made the house change from that came into effect in 2019. Source: Chainalysis

Although in a part of the report speaks of the reception of 67 BTC, the sum of the amounts of records are obtained that the incoming transactions would 6,48 BTC. A similar situation occurs with the funds outgoing. On the one hand, it speaks about 66 BTC, but in the breakdown are accounted for 29,67 BTC.

A fact that highlights Chainalysis is that in operations with other exchange houses and P2P services is the majority of the transactions. Between the two have received an equivalent of $ 52,000 in CriptoLago and have sent more than us $ 252.000 from the exchange venezuelan. About the amounts and the history of exchanges the study highlighted:

Although the figures are relatively small for now, Criptolago is a new service, and we may look to grow their transactions with international services as the projects of cryptocurrencies the regime of Maduro continue to take shape.

The distribution of the operations have been carried out, mostly, to other exchange offices and P2P services. Source: Chainalysis.

Breaking News has tried without success in the past arrange interviews with the managers of the house of change. An opportunity also visited the headquarters of the startup, located on the avenida Bella Vista Maracaibo.

The house of change located in the state of Zulia, about 650 kilometres west of Caracas, is one of the seven bags authorized by the Superintendencia Nacional de Criptoactivos and Related Activities (Sunacrip). Along with CryptoEx, CriptoMundo, AFX, Support, Cryptia and Antwerp Coin, Criptolago has a license to trade cryptocurrencies, especially the project Petro announced in December 2017 by the president Nicolas Maduro.

The so-called “criptomoneda of Venezuela” is sanctioned by the government of the united States. Breaking News reported in march 2018 that the president, Donald Trump had issued an executive order that prohibited the marketing of any criptomoneda supported by the government of Venezuela among americans. Chainalysis mentioned that Mature is also sanctioned, as well as the president of Criptolago, who is also the governor of Zulia state, Omar Prieto.

To the sanctions of the project Petro, the president of the country and of the greatest directors of CriptoLago, also add the charges of “criminal charges”, issued by the Department of Justice of the united States against the national superintendent of crypto assets, Joselit Ramirez. Even, the united States offered a bounty of 5 million dollars for the capture of the superintendent.

Chainalysis also referred to this panorama of sanctions and mentioned that the regulators in the field of cryptocurrencies should be aware of the situation.

The regulatory professional in the field of cryptocurrencies must be aware of the services to venezuelan as Criptolago, as exposure to them could mean that their users are making transactions with (citizens) national, or organizations venezuelan sanctioned.

It is important to explain that Chainalysis is one of the most recognized companies in the ecosystem of the cryptocurrencies for research related to blockchains.

In an interview with this newspaper in may of this year, Daniel Cartolin, analyst of the agency, stated that in its work of analysis had identified which services were venezuelans, who were serving in crypto assets. To be consulted about whether they had conducted studies of operations with cryptocurrencies in Venezuela said:

We identify the services venezuelans in our products, but we have not published a study or report on the use of the criptomoneda venezuelan. Also, as we are an american company can not conduct business with Venezuela because of the sanctions.

It is unknown whether in the future there would be further studies on the rest of the houses change.