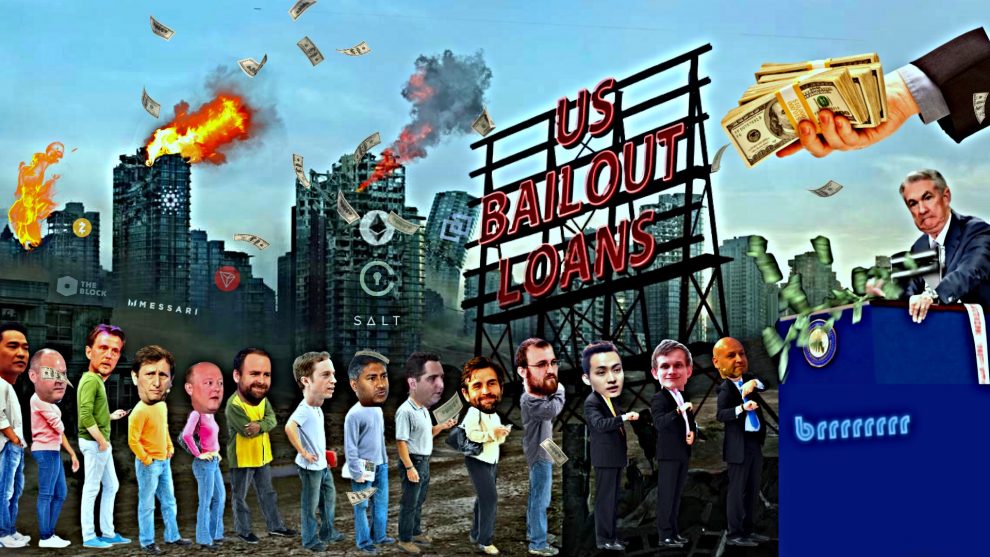 The community criticized the loans from the US government, as money inorganic.

Now, 40 companies in the sector received more than USD 18 million of the Program of checks of Payment.

In the beginning the sound “BRRRR” of the printer of dollars bothered me ears sensitive of the directors of companies of cryptocurrencies, but now that money is in their bank accounts, it seems that the issue of money, inorganic as is not a problem for them.

Big names such as ConsenSys, Electric Coin Company (Zcash), IOHK (Cardano and Ethereum Classic), Nebulous (Siacoin), Bittrex, Messari, and even ShapeShift, form part of a long list of startups who have accepted payments from the Program of Protection of Payment check (PPP), created for the management of Trump. At least 40 companies in the ecosystem, blockchain received more than $ 18 million as government loans.

The measure seeks to help small businesses stay afloat despite the economic crisis that has caused the Covid-19 in the united States. In this way, it is expected that the grant money is allocated to cover the salary of the employees and promote their business operations.

All this would sound very well, if you knew in advance that the money they are receiving these companies comes from a government decree that raises to inject liquidity into the u.s. market through the printing of money.

That is to say, it is a measure that would be generating money, inorganic, and public debt with the aim of rescuing the national economy in an enhanced contraction to 6%, according to estimates by the International Monetary Fund (IMF). However, the new dollars that are being printed are not born out of nothing, but of the diminution of the purchasing power of money already in circulation.

By accepting the money of the Program of Protection of Payment check (PPP) companies cryptocurrencies are supporting that which they swore to destroy. It was less than two months, the community moved to Twitter to criticize how the government of the united States to print money without real value, while recommending the use of Bitcoin because its issuance was limited and deflationary.

However, at present, these companies that have been the flag-bearers of a new banking and monetary system, have been forgotten in these arguments of yesteryear. The mantra “Bitcoin is better than fiat money because it is truly limited and their issuance is scheduled to be limited to” has become pure blablablá, because in their bank accounts the money is inorganic doesn’t seem to bother.

The meme of “the money printer makes BRRR” is very popular in the community to explain how Bitcoin is better than money fiducidiario. Source: brrr.money

What, then, were all these positions in favor of Bitcoin and the cryptocurrencies a strategy to attract more customers? Do the uncomfortable meme “the printer of the money makes BRRR” is only going to use when that money was in the pockets of others? These questions come to my mind when I see the extensive list of companies that are in the market of cryptocurrencies accepting a million, five million, to ten million dollars of the monetary system that you claim to repudiate.

This is a campaign full of hypocrisy, where many fill their mouths criticizing the bad habits of government when they are more than willing to participate in its endless cycle. And most of these managers know why we should not accept this money, and what that means for the economy, but have simply chosen to ignore its consequences.

The issuance of new banknotes and coins, is always a harmful activity for the society, since which impoverishes the pockets of its citizens. Jimmy Song, investor and developer, explains that you can not get money from nothing, which is why it is technically impossible to print money to further enrich the population or to cover losses as is the current case.

The printing of money, says Song, is rather like asking for a loan to all the owners of such currency. However, instead of earning interest on the loan that he is making to the State or to a company in specific, only you subtract the value of that money to redistribute and this causes a devaluation. While a group of privileged people get rich first, the majority receives a hard blow to your finances because your money no longer has the same value.

Experts in the field believe that due to the issuance of these checks help, sponsored by the management of Trump, the united States will face a strong inflation to 2021. This means that if a person today buys a litre of milk with a dollar, tomorrow they will have to pay for that same liter of milk three or four dollars. All this so a few can enrich themselves today and resolve your accounts, group that currently also of these companies of cryptocurrencies.

Bitcoin was not created for this, to receive grants of money centralized and it will only bring more inflation to the world economy? How to create a new elite of digital companies that benefit from the royalties of the State? I don’t think so. However, many of the startups that make it possible for this market does not seem to be aware of the contradiction in which they incurred, as if the principles of separating the money from the State and a new monetary system where we have the power of our money only to be convenient when we want to capture the attention of new customers and “increase adoption”.

We have to be consistent with our words, not for nothing is the meme of the “printer of money makes BRRR” is one of the most beloved of our community. We know how much damage we have done to print money without conscience, and we wanted to change it with ideas such as Bitcoin. However, now we can see after that little magic, that makes tickets each time you want to, to a long line of managers and developers of projects of blockchains that are waiting for their portion in the feast of the worthless money. Bitcoin Meme Hub illustrated this paradox in an image that serves as cover to this article.

And they are not alone, the community knows that this is a pit of argument that does not leave us well prepared. How can it be that we fill the mouth saying that Bitcoin is the morning because it devalues, if at the same time we received money devalued and printed it on impulse as a washcloth of cold water to the economy?

A bath of ethics

In a survey published by the Twitter user @owocki, which raises the question if really the decision of these companies was a hypocrite or not, a 54.6 percent of those who participated considered that receiving a check from the PPP after criticizing the government is a hypocritical stance. However, 29% of the remainder stated that it is a way of receiving returns for the taxes paid to the State.

A hypothetical well known crypto libertarian built their entire career & public profile on critiquing government, taxation, and collectivism in general, then gets a $1mm+ PPP bailout during their time of need.

The CEO of Shapeshift, Erik Voorhees, argued in the same tone that the company received this money “as a means to an end”, as they would be getting back what you have given to the government at interest. Also, some other can point to that would use the money to continue to develop and the day of tomorrow to become an alternative potent against the money fiat. This may be logical to some, but what is not taken into account with these attitudes is that we fall in lack of ethics.

The community of cryptocurrencies have their principles and it has worked these last few years without major problems thanks to them. We can not today, let the big competitors of this industry to take advantage of the free money because it is lucrative, but without being in turn responsible of the consequences generated by such money. And the consequences are real: to impoverish even more people.

If the cryptocurrencies based on Bitcoin were created to oppose this system that only benefits those that are close to the higher level of government, then we cannot perpetuate these behaviors. When the heart of a community is in their ideology and their vision of a tomorrow different and better, then every one of our steps should be consistent with that world we are creating.

Unfortunately, actions such as these lead us to an opposite direction, where the traditional banking continues to gain in their game. And each one of these companies that have accepted checks from the government knows this, but prefers to pretend dementia.

Disclaimer: the views and opinions expressed in this article belong to the author and do not necessarily reflect those of Breaking News.