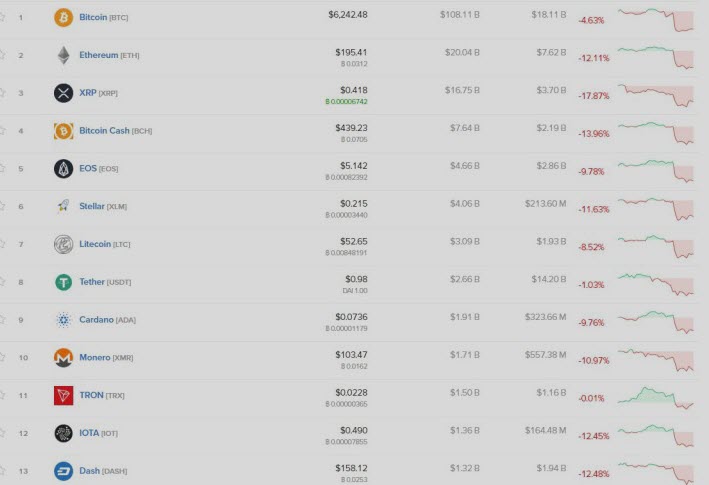 The registered cryptocurrency market was at a significant loss this week, approximately US$ 20 billion in market value was lost within a span of one week.

All the main cryptocurrencies listed on the first page of the site have lost up to 17% in the last 7 days.

Last month, Bloomberg reported that the crypto derivatives market lost 80% in market value since the highest peak in December 2017. That loss exceeded 78% of the Nasdaq index after the dotcom bubble in the year 2000.

In January 2018, the total market of cryptocurrencies possessed US $ 822 billion, today, at the moment of the product redação the market has US $ 198 billion.

The market analyst, Neil Wilson, warned that “the cryptos are a massive and speculative ball as many of us warn”. Throughout the past year, several analysts issued similar alerts, saying that the cryptocurrency market could be walking for an imminent implosion.

Still, in 2017 in Brazil, economist Samy Dana, anchor of the program Conta Corrente (Globo News), and collector of personal finances in G1 explained the risks of investing in cryptocurrencies and warned of a likely bubble.

When Bitcoin began to lose value in 2018, Samy saw the social networks to replace the warning that it had given and that it was certain.

“The rapid growth of crypto-coins may create new vulnerabilities in the international financial system”. IMF

Last year, American regulators such as the Securities and Exchange Commission began (slowly) to crack down on fraud in the cryptology market.

Cameron and Tyler Winklevoss, the twins who had already been processed by Facebook founder Mark Zuckerberg before investing heavily in cryptocurrencies, had a proposal to create the first fund traded on SEC-charged bit exchanges earlier this year.

The regulators who reviewed the Winklevoss proposal were concerned with the fact that the bitcoin was susceptible to fraud and market manipulation.

The cycle of high and low crypto coins is not new, experienced investors tend to “remain optimistic about the long-term potential of the market”.

The main argument is that anyone that was bought years ago, when prices were very low, would still have huge profits.

A quick search in Reddit posts indicates that some people are blaming the auction market. Others are apt for deliberate manipulation of a “Whale” that controls 40% of all bitcoins, or just a “sensationalist narrative” of media.

It’s clear that it’s possible that it’s a wake-up call, but this market has become bigger and has recovered!