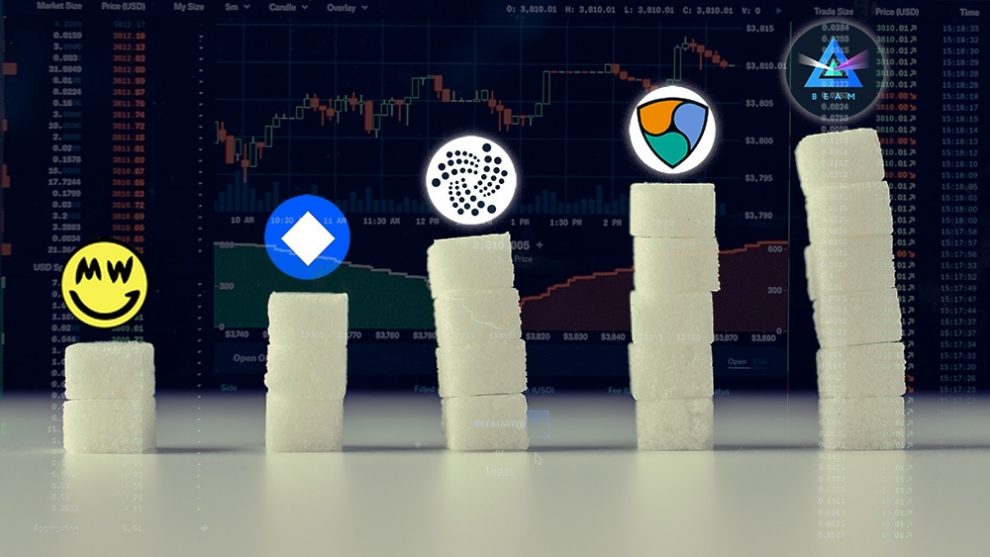 During the week of the 18th to the 24th of July the market for cryptocurrencies is observed mostly on the rise, then balances the red of the previous week. Most of the altcoins have increases of up to almost 15%. The few cryptocurrencies with low lose on average up to 8% less.

Bitcoin, the main criptomoneda of the market, is recovering compared to last week. In these seven days, the price of BTC went up on average 4,45%. The value ranged between us $ 9.143 and the $ 9.547, according to the statistics of Live Coin Watch. In this period highlights the rise observed on the 23rd of June, which seems to be related to the statement of the Office of the Comptroller of the Currency (OCC) of the united States, allowing banks to offer services of custody of cryptocurrencies.

Ether also rose in price, with an average improvement of 21.3%. The price of ETH began to rise significantly on July 23, reached a peak of USD 282 this 24 of July. The increase of the criptomoneda occurs then the ads associated with the launch of Ethereum 2.0, whose advances were reported by Vitalik Buterin.

In parallel, the price of other cryptocurrencies relevant market is also on the rise: ethereum classic (ETC) increased 4,68%, XRP from Ripple increases 5,86%, and litecoin (LTC) of 6.6%.

The cryptocurrencies most appreciated this week are led by beam (BEAM) and NEM (XEM). Rounding out the top Iota (MIOTA), waves (WAVES) and grin (GRIN).

Beam stands out as one of the cryptocurrencies focused on privacy, protocol-based MimbleWimble. This July 23, the team behind the criptomoneda published a note on his blog in which he offers details about the new tools of privacy of the platform.

The information highlights that after the recent network upgrade, which occurred at the height of the block is 777777, developers now have the ability to create applications to finance decentralized (DeFi), offering greater confidentiality in the transactions. The announcement coincides with an increase in the price of criptoactivo, which went from 0,39 dollars on the 23rd of July to $ 0.47 in this July 24. This after having remained in the range of 0.3 and 0.4 dollars the previous days.

The new functions are part of Eager Electron 5.0.9328, a protocol that was activated with the bifurcation of the 28th of June. The average growth of BEAM for the week was 28%. The market capitalization at the time of this writing is $ 30,1 million and the trade in the last 24 hours has been of USD 11.7 million.

Available criptoactivo collectible of Lithuania, it runs in the NEM

The Central Bank of Lithuania officially this July 23, the launch of your coin collection digital LBCoin, a criptomoneda that runs on the blockchain private bank, which uses the protocol Symbol of NEM. This launch coincided with the increase in the price of the criptomoneda, whose growth weekly average was 13.8%, ranking the second place of this top.

The price of XEM, the criptomoneda of MEN, began the week with a significant increase in the July 18, when it reached a peak of USD 0,053; however, presented a slight decrease in the following days. Even so, the bias is generally upward. Meanwhile, the team of MEN also shared on Twitter the availability of LBCoin, inviting the public to the purchase of the collectible.

This week NEM has also released a tutorial for the use of its platform blockchain Symbol, directed to traditional companies. To date, the market capitalization of XEM is around USD 456,9 million, with a volume of daily trade of USD 9.6 million.

The new currency trading of Lithuania runs in the blockchain of NEM. Source: Live Coin Watch

The semiconductor manufacturer franco-Italian, with headquarters in Switzerland, STMicroelectronics (ST) announced on 23 July a new package of features for its software tools called STM32Cube. These new functions allow any electronic device that incorporates the microcontroller enabled by IOTA, can communicate with the protocol to Tangle through a built-in interface.

The dissemination of this news may have had a positive influence on the price of the criptomoneda, that on the same date as the announcement came to a maximum of us $ 0,284, then starting with a minimum of 0,241 dollars on the 18th of this month. The average growth of IOTA was 12.5%.

The company ST is considered as the largest manufacturer of semiconductor chips of Europe and one of the leading manufacturers of integrated devices. At the close of this report, the market capitalization of MIOTA is USD 750, 9 million, and the volume of daily trade is USD 10 million.

Waves is located in the top of the cryptocurrencies most appreciated for the second week in a row. The average growth of the price of the criptomoneda reaches 7.5%. All this, in the midst of the dissemination of information about the association with Band Protocol, a project that presents itself as an “oracle data decentralized chain cross”.

The objective is to promote functions related to DeFi in the platform from Waves. The team of Waves and the of Band Protocol made this July 24, a LOVES with the community of the criptomoneda to explain the details of the association. The companies also hope to contribute to the development of the Web 3.0 through the integration of the oracles of the Band to the platform from Waves, as indicated on the 8th of July last to the time of the signing of the agreement.

Meanwhile, the criptomoneda reaches its maximum value of these seven days on the 22nd of July, when it traded at USD 1,72. The rise has been constant since the day 20. To date, the market capitalization is USD eur 155.4 million, and the volume of trade in the last 24 hours was approximately $ 22.6 million.

Waves is associated with Band Protocol, a company that offers an oracle of data. Source: Live Coin Watch

This week the platform of GRIN ran a new update to the height of the block 786240. The hard fork was completed on 19 July and joined the v4 version.0.0 in the portfolios and v4.0.1 in the nodes of the network, compliant with a new standard called Slatepack. In the framework of this event, the average growth of GRIN in these seven days was 4,97%.

With the incorporation of the standard Slatepack, GRIN modifies the way in which the parties send the transactions into the network and hopes to improve the experience of users and developers, to generate a single method of transaction. It replaces the variety of methods already existing. The date for the hard fork the price of the criptomoneda declined slightly, although it started to climb gradually on the same day until you reach a peak of USD 0,458 this July 24.

The complete functions of the new standard will be implemented in the next branch of GRIN, which was scheduled for January 2021. For the time of the writing of this article, the market capitalization of the criptomoneda is of 21.6 million dollars, while the volume of daily trading is $ 4 million.

Grin incorporated the standard Slatepack to unify the form to send transactions on the network. Source: Live Coin Watch.