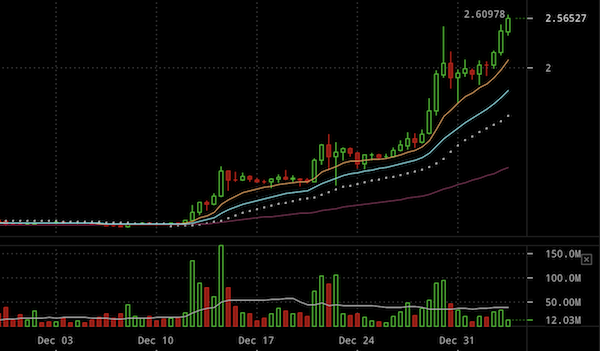 Ripple (XRP), dubbed by many as one of the most cryptocurrencies out there, continues on its bullish run with the price surpassing the $3.5 mark and well en-route towards $4.

As of this writing XRP is trading at $3.77. The humble Ripple (XRP) was at $0.006 exactly one year ago and as of now has its value multiplied by hundreds of times. The XRP now commands a market cap of $106 billion – the highest level achieved by any currency except for bitcoin, standing at nearly half that of btc’s current market cap.
While its trading volumes are at around the same level as eth, close to $5 billion, with South Korea handling much of it.

There are no specific reasons why the price of XRP continues to rise, but it seems to be that banks testing out Ripple may be part of the reason behind the increase.

Another reason we believe is the price difference between Ripple and Ethereum and Bitcoin. The $3.70 price tag of now makes it a very motivating buying factor.

Only around 40 billion XRP have already been issued with Ripple the company able to sell some 1 billion of them a month. Moreover, there probably would be nothing to prevent Ripple from increasing its supply of 100 billion. Ripple’s founders have another 20 billion XRP, translating now to almost $60 billion. An amazing amount considering XRP’s inventor left the project. XRP, however, doesn’t seem to care and considering the global market cap has now reached a new high of $700 billion, its rise might be due to new funds.

In which case, it remains to be seen for how long Ripple will be able to keep running the show. Usually, it is only for a brief few days, but with South Korea’s game of chairs now finding its way to XRP, who is to say.