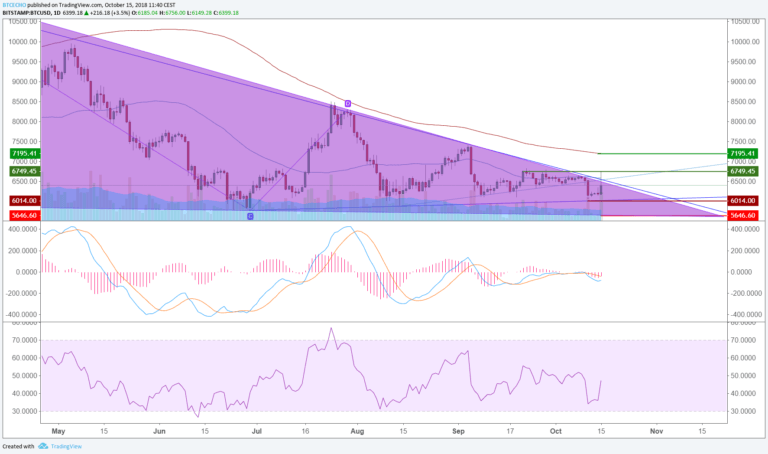 The total market capitalization has fallen to 211 billion US dollars. With the exception of Bitcoin, all cryptocurrencies, even tether, suffered significant losses. Bitcoin itself also rose by just under one percent.

The today is coined by a momentary price rally, how lastingly this is, however, must show up. Regardless of the performance within the last week, the impression with almost all cryptocurrencies within the top 10 is rather bearish, so that one should currently be cautious with long positions. Instead, you should observe the behavior at the indicated supports and resistances before opening a short position or a long position.

Roughly speaking, the Bitcoin price was as stable as one would wish a tether to be. But small cattle also make a mess and so the price drop was almost undone a few days ago. Altogether the Bitcoin course continues its sideways migration. The resistance of the Triangle Pattern, which has been pursued since February, has been tested but has not yet been broken. With a MACD slipped into the negative and an RSI at 45, an overall bearish impression is created.

Although the Bitcoin Cash price also had to cope with a price loss of almost eleven percent, Cardano has to bear the inglorious title of “Loser of the Week” with a price loss of over eleven percent. The plateau, which the price passed through between mid-September and early October, could not be maintained after a final test of the resistance described by the exponential moving average EMA50. 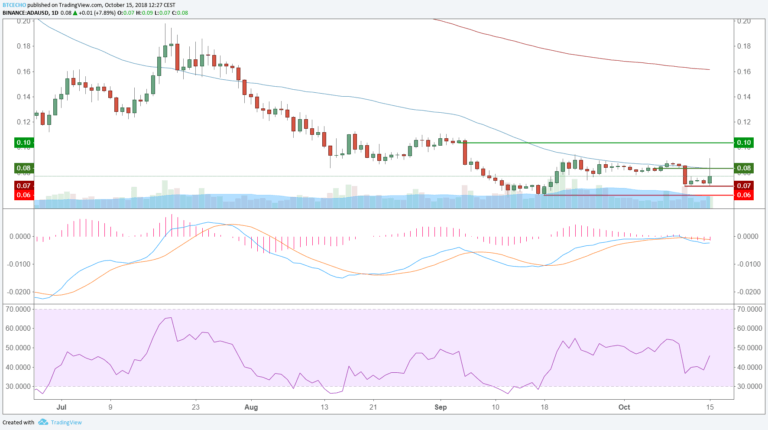 The negative, falling MACD and the RSI at 47 lead to a bearish impression. Similar to the case of Bitcoin, one should wait for the behavior at the first support at 0.07 US dollar and at the first resistance at 0.08 US dollar. If the price falls below the mentioned support, a short position with a target at 0.06 US dollar and a narrowly chosen stop loss is the best choice. If the price rises above 0.08 US dollars, you can also open a long position with a target of 0.10 US dollars with a tight stop loss.

With the media hype that Justin Sun creates about Tron, one wonders: Do we see Tron in the top 10 again? In any case, the Tron course would only have to rise by seven percent to push Monero from tenth place. But even between Monero and Cardano, there is only eleven percent. After all, the gap between EOS and Stellar has dropped to 16 percent. The occupation carousel of the top 10 can, therefore, turn at various points.

Winners and losers in the price slump

On average, all cryptocurrencies fell by almost one percent. Thus, on average, all cryptocurrencies performed worse than Bitcoin. For the Top 100, the result is even clearer. Here, prices have fallen by an average of five percent. In addition to Digitex futures, which can show a price gain of 81 percent, the prices of GXChain, Eternal Token, Eternity and Loom Network rose by more than ten percent.

Digitex futures have recently attracted increased attention with the prospect of commission-free futures. The same can be said about the current Airdrop. The loser of the week is Bytecoin, who had to cope with a price drop of 34 percent thanks to various delistings. 82 out of 100 cryptocurrencies performed worse than Bitcoin. Bitcoin’s market share has risen accordingly and currently stands at 54 percent.