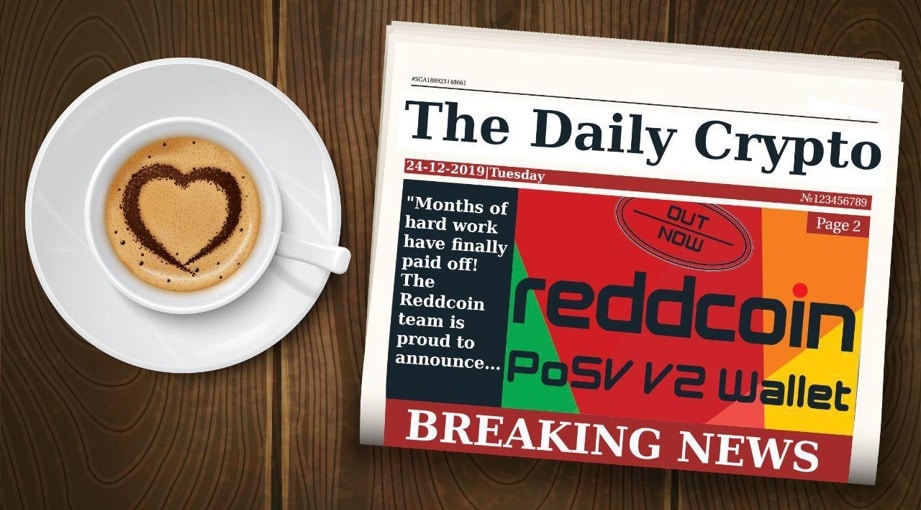 Reddcoin has agreed to rebill the core protocol PoSV to reward stakers assets.The staking of Reddcoin validate transactions, secures, and generates and signature blocks in the network.February 6, 2020, Albuquerque, NM: the crypto pioneer and altcoin first-generation Reddcoin (RDD), has announced the recent release and the activation process is in progress for its algorithm of a consensus of staking PoSV v2, exceptionally rewarding.While the look of the wallet for Reddcoin has not yet changed, the underlying engine it has been updated to prepare for the blockchain Reddcoin in a new direction and also to incorporate the latest code of safety and function of the core of bitcoin. Reddcoin has incorporated this technology in next update of wallet-Core v3.x required.The ecosystem of Reddcoin is a financial solution self-funding, user friendly and environmentally friendly for the next generation. Even more impressive than that, is the fact that it is led by a development team completely voluntary: a group of unpaid people who are passionate, backed by an amazing community, all with the intention of seeing the project to reach new and exciting heights in 2020.

Why do you need to update?

Already in place, the activation of PoSV v2 will take place when the network Reddcoin has observed that 9,000 of the 10,000 previous blocks are supported / generated by wallet v3. To the date of the note, the network is 5,200, or ~ 58%.Apply a softfork super majority in the transition that will keep the wallet v2.x older to be able to send or receive transactions, or support. The transition will also trigger the rules of participation “improved” and a deduction of each backup enhanced to help support the development of Reddcoin. For more details, the “Redd Paper” newsletter is available on our main web site at www.reddcoin.com.Desde your beginning in 2015, the network Reddcoin, although designed for a growth of 5%, has only seen a modest annual growth of 1%. With a large proportion of coins being abandoned and lost, the development team and the community of Reddcoin have agreed to rebill the core protocol (PoSV) to address this need and to reward stakers assets, while ensuring a target annual growth closer to 5%.Reddcoin is hoping that this new update of your wallet, combined with a growing community of active members, bring the network closer to that goal of organic growth, while providing a unique set of rewards for the users and a welcoming community and support, at the time that it will incentivize users to give tips and to use RDD.

Do you even support?

The support (staking) is really important because it validates the transactions, secures, and generates and signature blocks in the network. A decentralized network robust you need so many distributed nodes as possible, all of them of agreement in the state of the chain of blocks and which blocks are valid.Support with holdings of currencies serves to help secure the network Reddcoin and the backing acts as a green alternative to mining is energy-intensive of Bitcoin and allows all users of Reddcoin to receive reward in proportion to their holdings.Users have a large number of software options when it comes to staking, including mobile devices (Telegram), PC, Linux, Mac, Raspberry Pi and more. Embedded systems and portable technology to the end user, as well as the integration with other technologies, and vertical markets are on the horizon for Reddcoin.

Any holder of Reddcoin (RDD) that is not supporting currently is losing the rewards and the ability to help the cause at the same time. For those dedicated to supporting their currencies, helping to ensure the network and its transactions, there are some rewards are quite high. The network aims to an annual rate of return of 5% and has multiplied the actual yields by the corresponding multiplier to bring the growth of the network as a whole to where it should be.The backrest can now add a 5% per year just to have RDD in your wallet. This can be achieved in simple devices such as an old Raspberry Pi, a box Linux, a Mac or a PC or laptop low-end.The effective result of this activation of PoSV v2 is that, in execution, if 20% of the network is in line and supporting their rewards resulting shall be multiplied by a maximum of 5x, which will lead to a personal return of cash of 25% per annum. This will dynamically adjust per block in function of the actual statistics of the network, which leads to a variable rate of rewards multiplied, in accordance with the actual statistics of the network.Originally a fork of Litecoin, with an algorithm, PoSV only as a currency of proof-of-participation, Reddcoin is one of the names the oldest and most established in the ecosystem, crypto, with a long and rich history dating back to 2015. What is remarkable, the project executed voluntarily has achieved a modest growth, but stable since its inception, and this new update now it offers participants the opportunity to achieve more passive income in the long term, while also helping the project to continue to shine and grow. For a detailed look on the staking, the Reddpaper can be found on the official website of reddcoin.

PoSV v2 was designed to improve the network Reddcoin in three very specific areas.Stabilizes the growth of the network to the modest inflation rate of 5% per design, by ensuring a plentiful supply of coins for tips and use, and avoiding the mentality of “hoarding” by reducing the rewards associated with age, and encourage rewards based on the speed.Encourages users to support and ensure actively the network instead of leaving coins on the exchanges or wallets, cool, multiplying the rewards received in accordance with the full participation of the network in place of the individual. This provides a distribution network more robust of the nodes and improves the security and robustness of the network with each new staker, and reward stakers to participate in the community in general.Provides a flow of funds from the own network Reddcoin to be used with three specific purposes: to improve and expand Reddcoin and its range, stability and usability. These three are:to Provide an operating fund to the development team to allow associations, list, salaries, operating costs and other strategic activities and tactics.To provide a fund of 10% of the proceeds to be used in the refund or restitution to the members of the community of Reddcoin that have experienced loss or theft, or other problems beyond their reasonable control.To provide a fund of 10% of the proceeds to allocate to the efforts of philanthropic and altruistic (“Charity”) to support the community within the space Reddcoin.These three objectives for the funds received will allow Reddcoin maintain the work of accelerated development, to provide a safety mechanism for the real members of our community at the time that discourage fraud and protect users of Reddcoin in a unique way and welcoming. And the third objective of the charitable efforts is intended to spread the message of Reddcoin inclusion, security and protection. The core developers of Reddcoin are missionaries, and have the support of the community and a loyal Reddhead: a group of people bright, active and bright. You can be a ReddHead today!For more information about Reddcoin, visit: https://www.reddcoin.com/
More information about PoSV v2 and update: www.medium.com/@techadept
Information of Reddcoin in CoinMarketCap – https://coinmarketcap.com/currencias/reddcoin
Information of Reddcoin in Binance: https://info.binance.com/en/currency/reddcoin
Operate Reddcoin on Bittrex – https://global.bittrex.com/Market?MarketName=BTC-RDD
Find Reddcoin on Facebook: https://www.facebook.com/reddcoin
Follow to Reddcoin on Twitter: https://twitter.com/reddcoin
Join the Telegram’s official Reddcoin: https://t.me/ReddcoinOfficial
Media contact
Name: Jay Laurence
E-mail: (email protected)
Telegram: @TechAdeptDescargo of liability: The contents and the links provided in this article only meet for informational purposes. Breaking News does not provide recommendations or advice on legal, financial, or investment, or replace the due diligence of each interested party. Breaking News does not endorse any investment offer or similar here promoted. For more information click here.