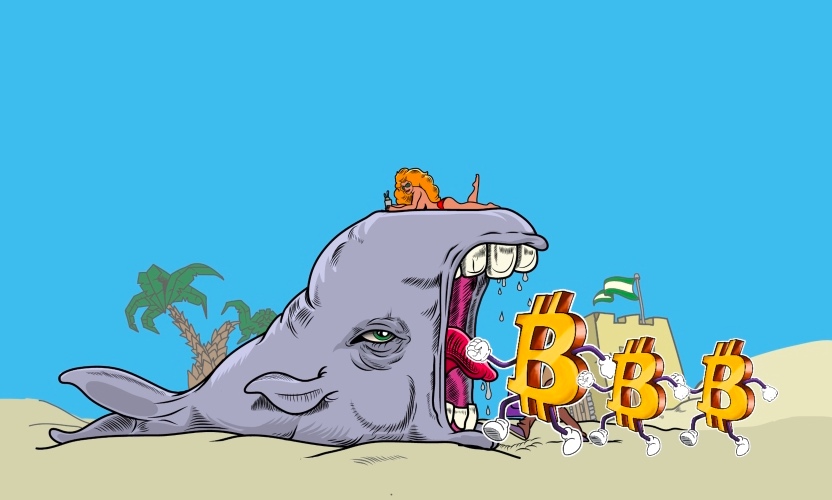 This first month has been quite interesting to analyze in general, including the market of the cryptocurrencies. Specifically, here we discuss the highlights of this third week, in which the whales crypto have been quite active. To this end, the main monitoring tool is the Whale Alert.

Across nine transactions, the whales crypto mobilized this amount. For this reason, were employed by exchanges such as Coinbase, OKEx, and Binance. Of the total, 5500 BTC were transferred in four different moves from exchanges to wallets unknown. This tendency to accumulation will be having variations along the week. The remaining, of 5.961 BTC, was transferred from wallet unknown to exchanges in 5 different amounts. To this day, there remained a tendency to build up, but it can also be seen as it takes advantage of the moment bullish for profit BTC that were acquired in epochs of less valuation. However, throughout the week, this day is the one that kept the price of BTC lower. On the other hand, at this date, the funds stolen from Upbit continue to increase. 11.046 ETH were stolen by hackers in two transactions, each in a 6046 and 5000 ETH respectively. The equivalent in dollars of this theft is 1.578.697 USD. If we compare it with the last weekly report of these movements, made last week, we will see that the hackers have changed gradually their strategy. Now choose to steal larger amounts in a smaller number of movements. In other interesting aspects of this day, we witnessed the burning of cryptocurrencies as USDC and PAX. In the first case, we burned a total of 2.531.045 USDC, while in the second the total was 5.452.627 PAX.

If the figures of the movements of whales in crypto at the start of the week seemed to be comprehensive, there are continue reading the development of their actions for the rest of the week. Nothing more on Tuesday, 14 mobilized 24.921 BTC for a period of 21 movements. Of these 21 movements, eleven were made from exchanges to wallets unknown. As of Monday, the exchanges used included OKEx, Binance and Coinbase. Again, the tendency to the accumulation and the search for greater profits in this wave of bull are relatively together. Transfer most significant was a 3000 BTC from Binance a wallet unknown, but there are also other two by equal amounts or a little higher than 2000 BTC. However, it became known that one of them was an internal transfer of Binance. During this day, the whales crypto also mobilized its assets in altcoins. These were the cases of USDT, TRX and BAT. For example, the transfer of 5.554.422 USDT is made from a wallet unknown to Binance. This figure is equivalent to an amount of 5,525,771 USD. In addition to 60,000,000 TRX and 12.000.000 BAT also went to this exchange.

Without a doubt, this day the undisputed protagonist in the transactions of the whales crypto was Bitcoin. The most interesting thing about this day is that for a few moments the panic seized those who observed a movement quite unusual in the page of Whale Alert. The root of the issue was a transfer by 123.447 BTC from a wallet unknown to another. Many users began to talk of a strategy of dump. However, the Whale portal Alert made the clarification that it was the back of an internal transaction made by Bitfinex. Without this event, the rest of the day is mobilized 17.327 BTC, divided into 17 transactions of various amounts. Only five of them were made from wallets unknown to exchanges, but added up to a total of 5462 BTC. Binance, Huobi, OKEx and Bitfinex are still used in this day. Indisputably, the trend winner this day was the accumulation, as nearly 12,000 BTC is out of the market and took wallets unknown. Other currencies such as USDC, USDT and XRP also made their appearance in the world of whales crypto. For example, were minted 20,000,000 USDC, and then were transferred to a wallet unknown. In terms of the second-mentioned 5.000.000 USDC moved from Bitfinex to a wallet unknown. Finally, 29.000.000 XRP came out of Bithumb to another wallet unknown.

In comparison with the previous days, this Thursday just mobilized 4261 BTC throughout the day and in four different movements, of which only one was from a wallet unknown to an exchange. Huobi, Coinbase, Binance and OKEx were the channels to make these movements of Bitcoin. The build continues to be outstanding as the trend number one to this day, while the price of Bitcoin continued to rise as the demand, while the supply is restricted a little more. Also, the whales decided to change some funds USDT and PAX that they had. With regard to the first, it was reported one by almost 5 million USDT directed to OKEx. As for the second, we are talking about 15.000.000 PAX directed to Huobi.

Almost to finish this report, we must remember the movements of the whales crypto this Friday 17. The accumulation was not exclusively in Bitcoin, but also in USDT and XRP. For example, almost 5 million USDT were transferred from Binance a wallet unknown. Then, we have that 27.000.000 XRP is taken out of Bithumb to a wallet unknown. In terms of Bitcoin, 4583 BTC reported, divided into five movements and different amounts. Of those five, three are from exchanges to wallets unknown. While both 1908 BTC are brought to the market, in platforms such as OKEx and Binance.

During this journey of the whales crypto only been reported five operations. However, each of these operations had a same sense, the same amount and the same type of cryptocurrencies. Specifically, there were five movements for 3000 BTC from OKEx to wallets unknown, adding up to 15,000 BTC. Before this, it will be appreciated of course accumulation while ensuring a less liquidity to the market.

What expectations for the future?

The above assumes in some way a continuation in the price increase of Bitcoin, since while the demand for BTC has increased their revenues expected, the supply has decreased. Price of Bitcoin during the week. The whales crypto recognise the advantages found in these peaks, especially those that rely on it will continue to rise and prefer to opt for the build at this moment. At the time of writing this publication, Bitcoin has a price of 9.132,73 USD, which is quite encouraging to promote exchanges in this criptomoneda; at least in the short term. With a market that is in a state of “extreme greed” (89), on the scale of the Fear and Greed Index, we can expect many more transactions than Bitcoin in the next few days. The following two tabs change content below. A degree in Liberal Studies from the Metropolitan University. Lover of innovation and a believer of the technology for the future.